James Sidney Ensor (Ostend, 13 April 1860-19 November 1949) was the son of an English father (James Frederic) and a Belgian mother (Maria Catharina Haegheman). With an eye on obtaining the title of baron, only in 1929 did Ensor seek naturalisation. Up until that point he retained his father‘s nationality. The family operated a souvenir and curiosity shop in Ostend and boarded rooms out to summer guests. The young Ensor attended the College of the Blessed Virgin in Ostend. 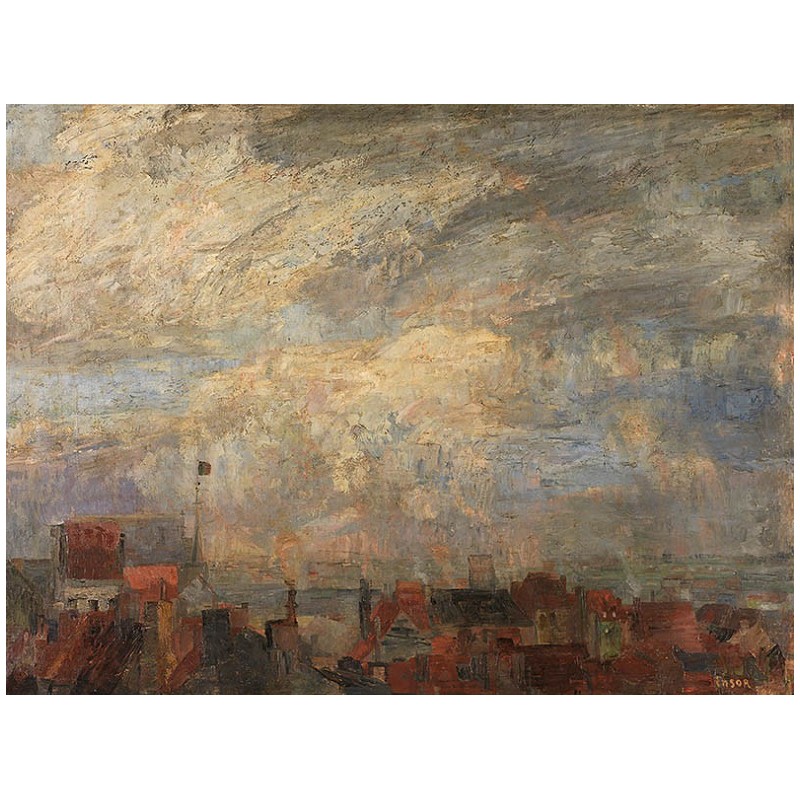 In 1876, Ensor attended drawing lessons at the local drawing school. During the spring and summer months he painted dozens of small nature studies on pink cardboard. From 1877 until 1880 he studied at the academy in Brussels. He received lessons from the Director, Jean Portales, among others. Fernard Khnopff, Theo Van Rysselberghe, Willy Finch and other future members of the exhibition associations, L'Essor and Les Vingt, were among his fellow students. In Brussels, he met the poet and art critic Théo Hannon, who introduced him to the liberal circles of Ernest Rousseau, professor at the Université Libre de Bruxelles, and his younger spouse, the nature expert Mariette Rousseau Hannon. The home of the Rousseau couple was a meeting place for the artistic, literary and scientific elite of the time. The contacts that Ensor had there-where he probably met Félicien Rops and Eugène Demolder and others-stimulated his artistic and intellectual development. Around the time of 1886-1889, Ensor would rework a number of his academic pieces into grotesque productions. 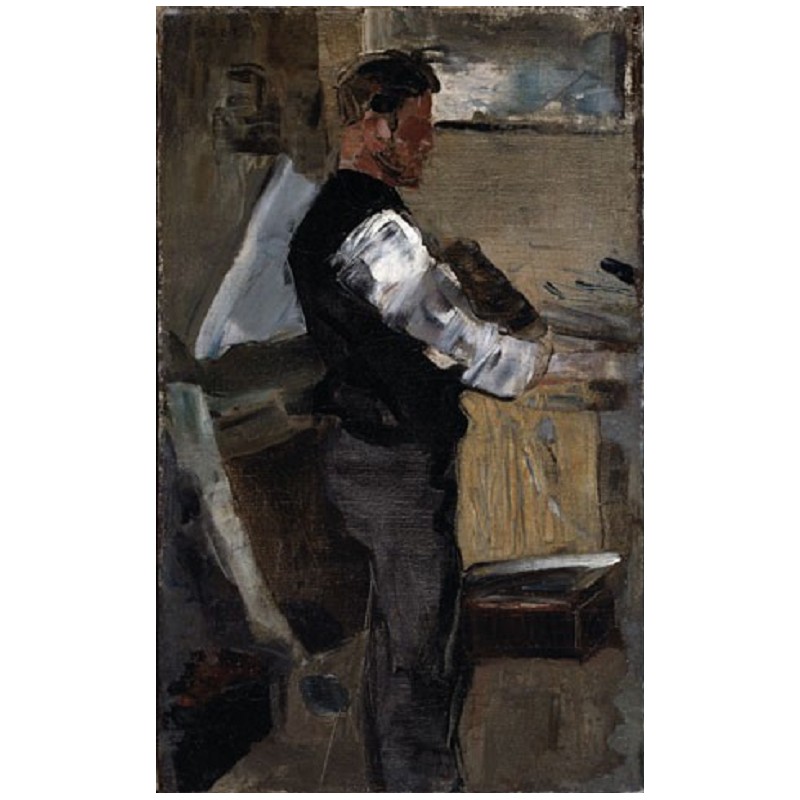 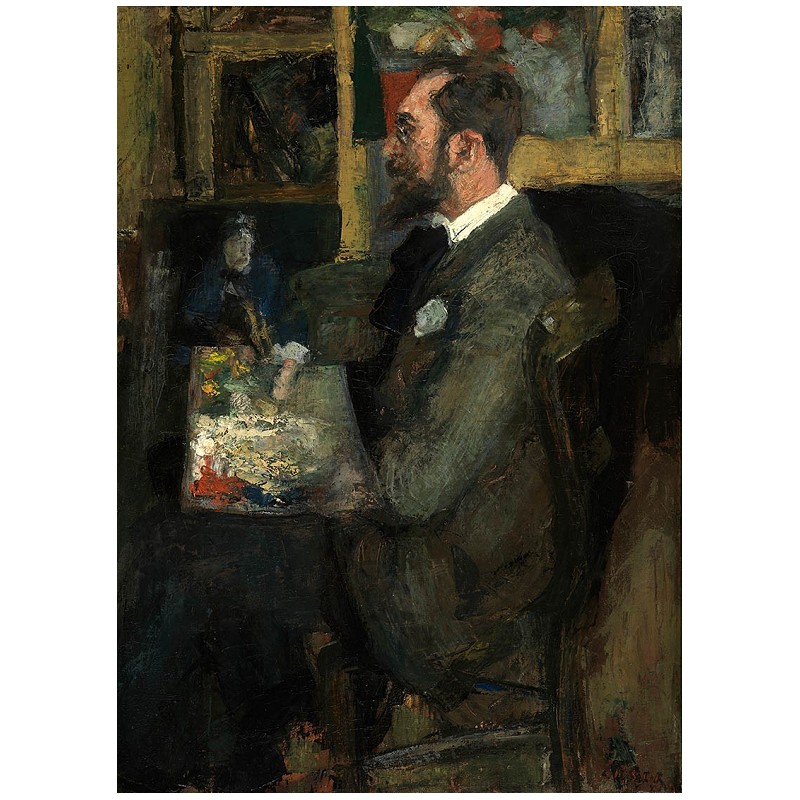 In 1880 Ensor installed a studio in the attic of his parents‘ home in Ostend where he would work every now and then in the company of Willy Finch. Although he lived in Ostend until his death, he regularly stayed in Brussels and actively participated in the artistic life of the capital city. With the exception of a few excursions to London, Holland and Paris, Ensor scarcely traveled.

In 1881, he debuted with the progressive Brussels art circle, La Chrysalide. He qucikly became recognised by friend and enemy alike as one of the prominent artists of the time. His seascapes, still lifes, naturalistic figure pieces and tableaux from the life of the young, modern bourgeois woman, such as the celebrated The Oyster-eater from 1882, unquestionably belong to the major works of the European Realism and plein aire movements. 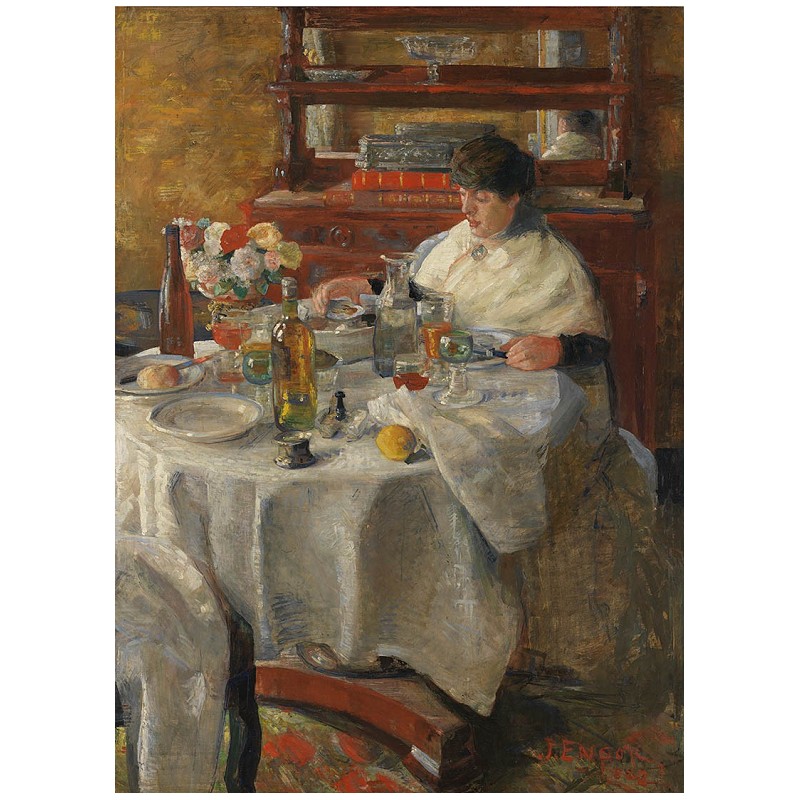 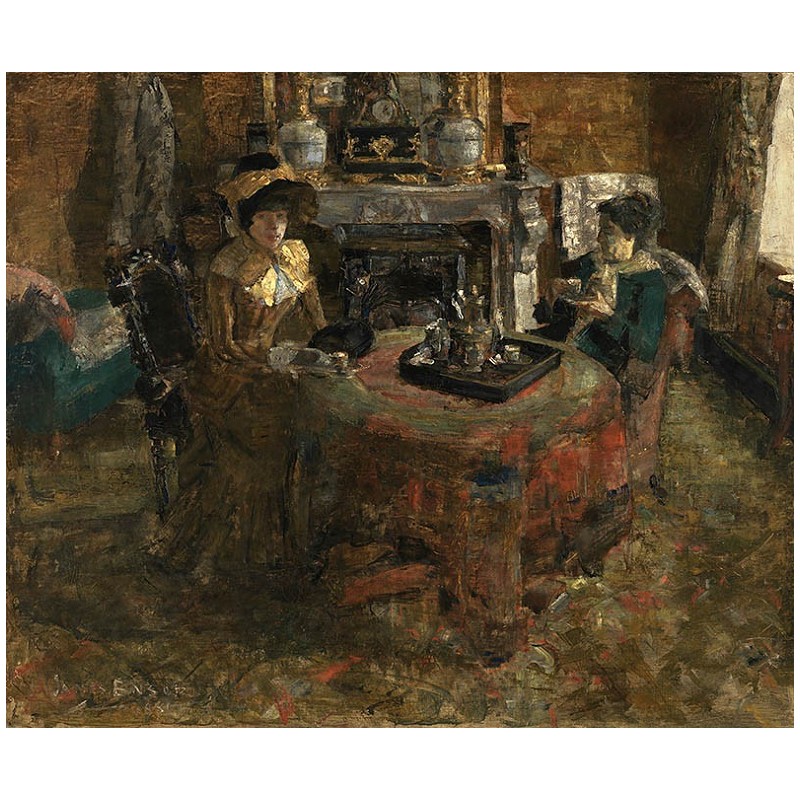 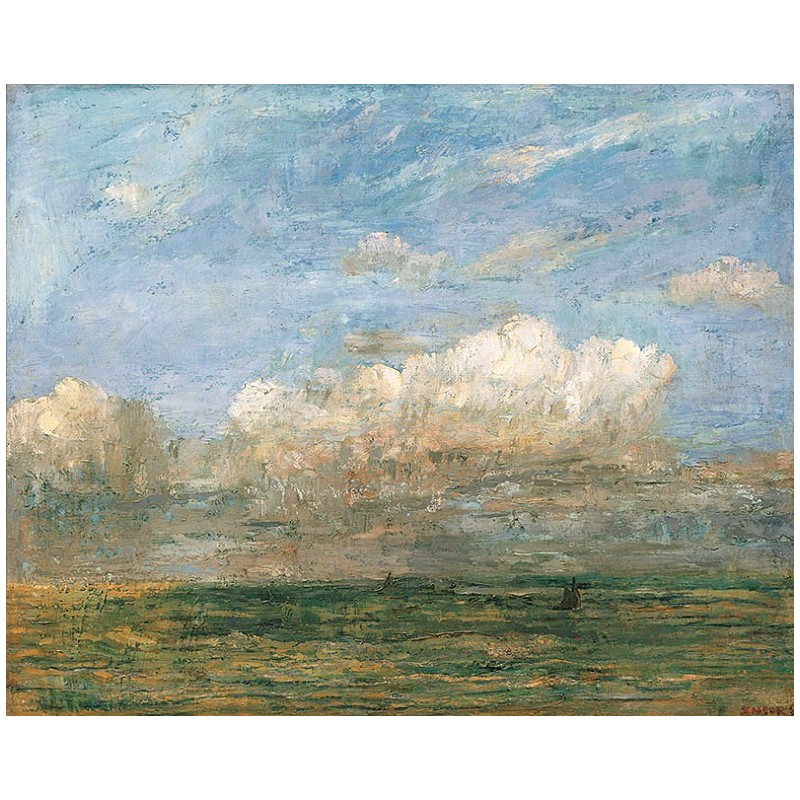 Between 1885 and 1888, Ensor‘s attention went chiefly to drawing and etching. Under the influence of Rembrandt, Redon, Goya, Japanese woodcuts, Brueghelian images and contemporary spoofs, Ensor developed a highly personal iconography and design. He rejected French Impressionism and Symbolism and lent himself to the expressive qualities of light, line, colour and the grotesque and macabre motifs such as carnival masks and skeletons, which he rendered in massive tableaux such as in the series The Aureoles of Christ or The Sensibilities of Light (1885-1886). These grotesque metamorphoses culminate in Ensor‘s most well-known and monumental mask tableau: The Entry of Christ into Brussels (1888-1889, oil on canvas, Los Angeles, J. Paul Getty Museum). 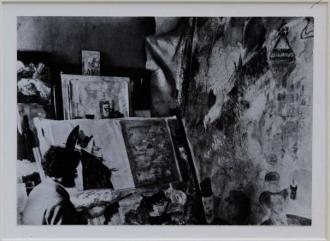 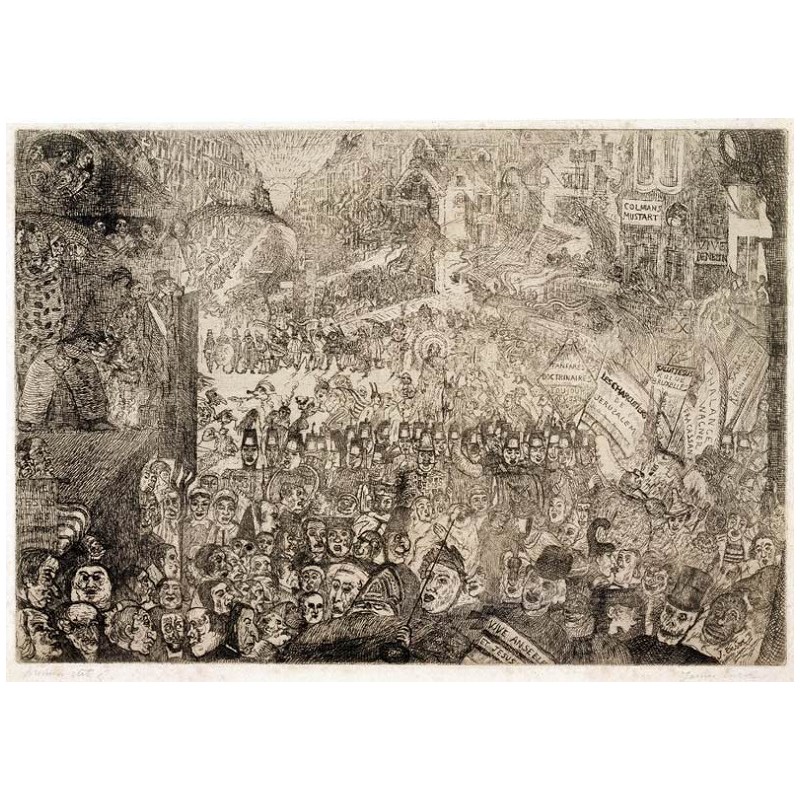 The women in Ensor's life

Around 1888 Ensor would meet Augusta Bogaerts with whom he maintained a lifelong relationship, though without ever living together with her. After the death of his father in 1887, Ensor was often charged with the care for his mother, his live-in aunt Mimi, his divorcée sister Mariette (or Mitche) and her daughter Alexandrine, as well as the management of the family store, the most important source of income.

In 1893 Ensor fruitlessly set himself against the dissolution of the art circle Les Vingt. Octave Maus, secretary of Les Vingt, founded the exhibition association La Libre Esthétique. Ensor was regularly courted by La Libre Esthétique. The Print Room of the Royal Library in Brussels purchased a large number of etchings in 1893, followed one year later by the Kupferstichkabinett Museum of Prints and Drawings in Dresden and in 1899 by Albertina of Vienna. The rumour that in 1893 Ensor had offered unsuccessfully to sell the complete contents of his studio for 8.500 Belgian Francs (BEF) has never been documented and appears unlikely in light of his growing commercial success. In 1895, Ensor successfully solicited the Minister of Internal Affaires for the purchase of The Lamps (1880, oil on canvas) for the National Museum (the present-day Royal Museum of Fine Arts of Belgium in Brussels). Ensor asked 2.500 BEF for the work. In 1897, he again successfully asked the city government of Ostend to purchase a painting for the City Museum. Ostend paid 2.000 BEF for Sick Wretch Warming Himself (1882, oil on canvas, destroyed in 1940). Ensor participated more actively in the local artistic life in Ostend and became chair of the Cercle des Beaux-Arts, which he established.

He was also recognised in Belgium as one of the pioneers of Modern Art. François Franck and the admirers who were members of the Antwerp exhibition association L'Art contemporain would successfully promote Ensor‘s work, both at home and abroad. 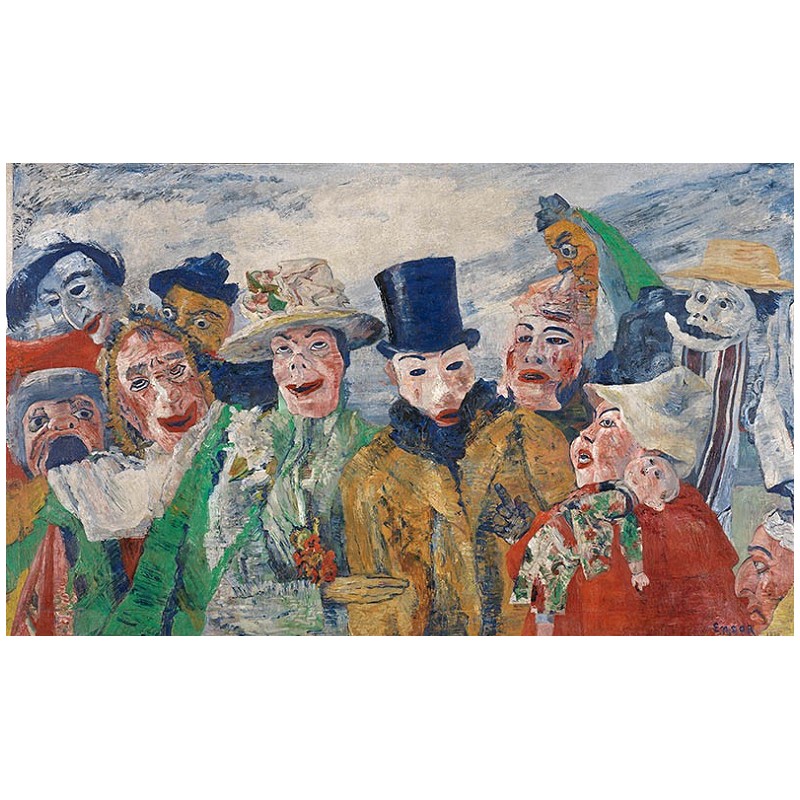 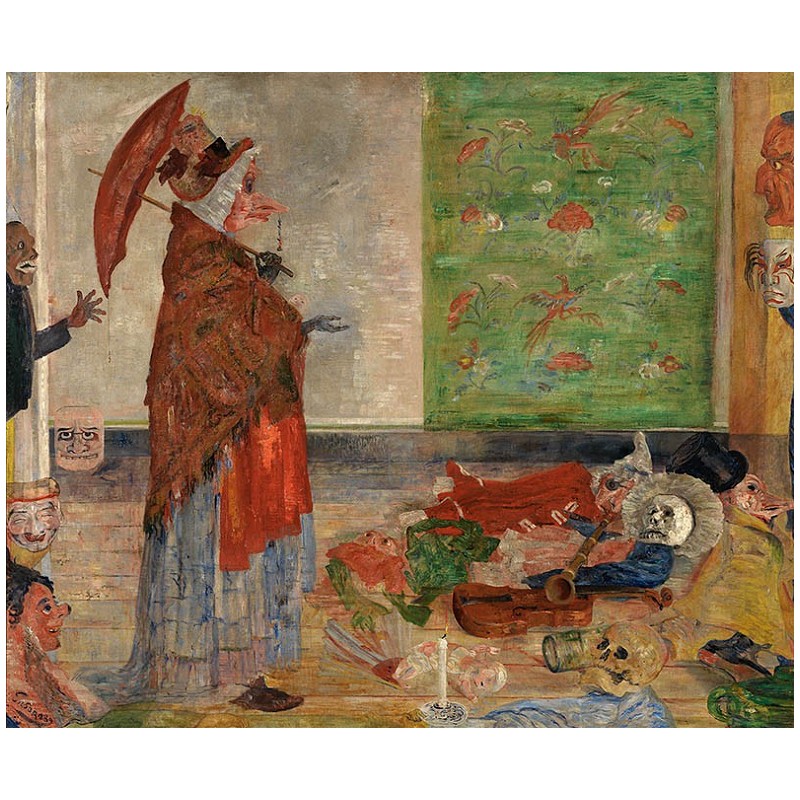 Astonishment of the Mask Wouse (kmska 2042)

Beginning in 1896, Ensor already was promoting himself more as a writer. Franz Hellens, who in 1974 wrote the foreward in one of the editions of Ecrits, spoke about 'maddest words‘ and indicated that this 'is the real Ensor [...] the sword-wielding and honeyed Ensor, biting and irreverent, naïve and cynical. The greatest enfant terrible that painting has ever known, a child in all the genuine and terrible connotations of the word‘. Primarily Ensor published on art in the newspapers Le Coq Rouge and La Ligue artistique. Later he was asked more and more as an occasional speaker and he took advantage of this opportunity to bring attention to the division of the sand dunes, modern architecture and vivisection.

In a number of speeches Ensor called himself a forerunner of Luminism, Fauvism, Cubism, Expressionism, Futurism and Surrealism. Ensor also placed especially great importance on his musical productions. In 1911, he wrote the libretto and composed the music for a ballet entitled La Gamme d'amour. For this pantomime he also developed the décor and costumes. In 1924, this ballet was performed in the Antwerp opera house. In 1917, Ensor moved to the house in the Vlaanderenstraat/Rue de Flandre that he had inherited from his uncle. Today, the James Ensor museum is housed here. 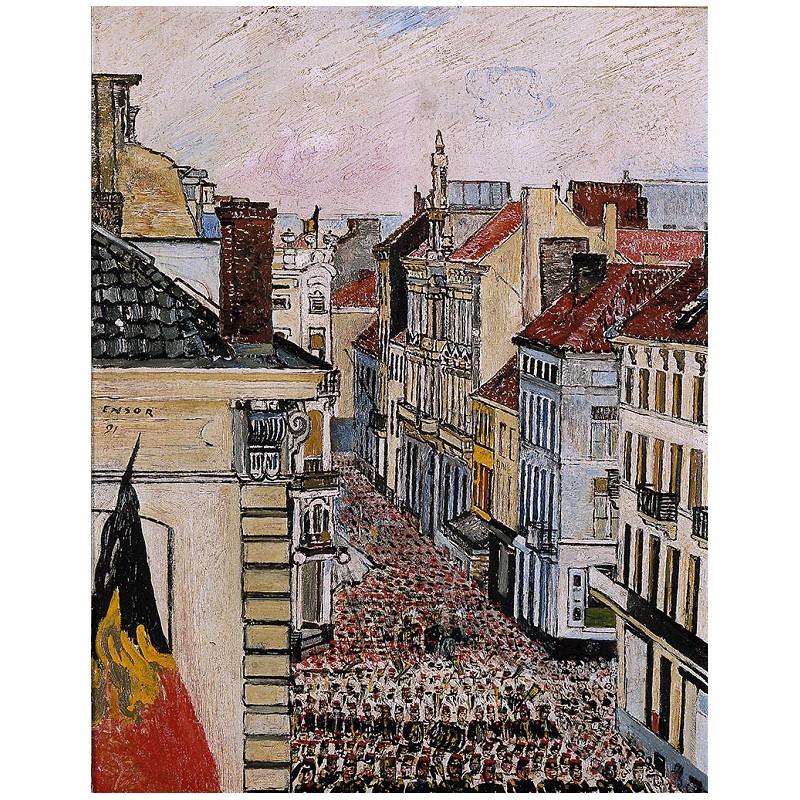 In 2003, a unique sound recording was discovered in the radio archives of the VRT. On this recording, along with other well-known West Flemings, Ensor was interviewed in 1936 on the occasion of the 'Day of the Sea‘. Ensor speaks flawlessly in the Ostend dialect in this interview. Ostend was more than his birthplace, it was his muse. He called it 'Ostend, dear little coloured flower, 'eaven of the sea‘.