New Ensors for the MSK 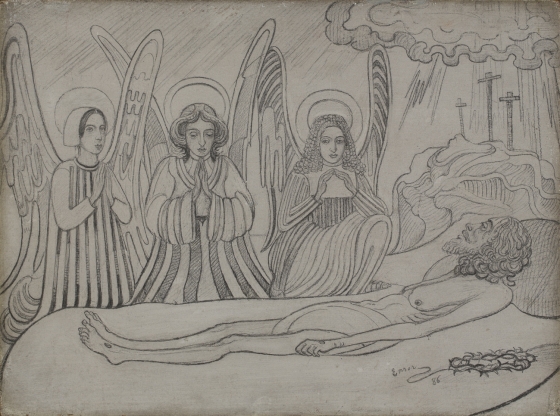 The Museum of Fine Arts in Ghent (MSK) purchased two drawings by James Ensor: Christ mourned by the angels and Faire des Grimaces. They are an important addition to the collection of drawings that the museum houses.

Ensor placed a lot of importance on the drawing. Between 1880 and 1895, his most creative period, he often used pencil and chalk and exhibited drawings as if being independent works of art. Sometimes he even appeared to give preferences to drawing.

Through the outspoken linear-decorative treatment, Christ mourned by the angels holds a special place in his oeuvre. The affected naivety and the inferiority of the figures and the landscape upon a non-realistic line and plane division, it is in line with the aesthetic of Paul Gauguin (1848-1903) and Maurice Denis (1870-1943).

It is a compelling expression of Ensor's individual approach to the religious thematic that he used in order to vent about his conflicting relationship with society. He identified himself with the Christ figure when as a misunderstood innovator he came into conflict with the artistic milieu of his time. It is thus also not Christ, but Ensor himself, who is depicted in the drawing. For, in the figure of Christ, he saw his likeness as the victim of the hostile masses.

Ensor loved to use his family members as models. He observed his father, his live-in grandmother and aunt, his mother and sister in the parental home in Ostend. Faire des Grimaces illustrates Ensor's daily drawing activity. With the inscription he pierced the tenderness in a playful, light ironic manner.