James Ensor collection in the Groeninge museum in Bruges 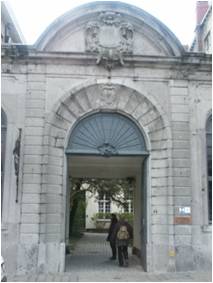 In addition to Antwerp and Ghent, Bruges also possesses a modest Ensor collection.

In 1955, eight, signed Conté crayon and gaphite drawings were gifted by the Kulturkreis E.V. to the print room. Most likely they originally belonged to one of the many sketchbooks that James Ensor filled up with studies on his direct environs. They fit closely alongside those that are kept in the Royal Museum of Fine Arts Antwerp.

Between 1995 and 1998, nineteen etchings were purchased that were hand-coloured in and painted with various techniques by James Ensor. They are representative of the diverse themes that Ensor rendered in his work, ranging from the subtly-represented landscapes and harbour views to demonic, grotesque and macabre tableaux in which the mask and skeleton motif are also depicted. Furthermore, they clearly show Ensor‘s importance for the caricature. These etchings were realised between the years 1886 and 1904.

In 2004, the musea of Bruges purchased a unique painting that fits in perfectly with the Groeninge Museum‘s collection profile. Icon—Portrait of Eugène Demolder (1893) indeed points to the mediaeval painting that was rediscovered during the last decades of the 19th Century. In the uppermost register of the work, Ensor indeed gives a reasonably accurate copy of Stefan Lochners masterpiece Madonna with Child in the Rose Garden (ca. 1440, Cologne, Wallraf-Richartz Museum). In order to involve the public with this acquisition, an awareness campaign was initiated whereby the denizens of Bruges and tourists were urged to make a small financial contribution. The campaign, entitled ̳An Ensor for Bruges‘ had various aspects: advertisements in local newspapers, postcard sales, a reading series, a publication of a portofolio with the cooperation of the Friends of the Musea and a small exhibition in the Groeninge Museum (19 March—18 July 2004).