James Ensor collection in the Museum of Fine Arts Ghent 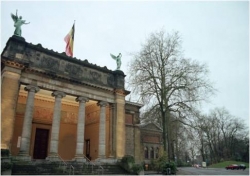 The collection and exhibitions direction of the Museum of Fine Arts Ghent (MSK Ghent) has been focused for years already on the art of the 19th and 20th Centuries. Within this period, Symbolism and Expressionism received special attention. The work of James Ensor is one of the focal points in this specialisation and this special attention is maintained and built up with care. With this, attention is given equally to the painter, draftsman and graphic artist that Ensor was.

The museum‘s collection contains five paintings. Old Lady with Masks (1889) was purchased in 1969 from the collector Roland Leten with the support of the Belgian state. In 1986, the museum purchased Willy Finch in the Studio (ca. 1880-1882) from the Ostend Gallery Atelier. In 1995, the King Baudouin Foundation acquired Skeleton Looking at Chinoiseries (1885 and 1888) and gave the painting to the Ghent museum on long-term loan. The museum also received works from the Flemish Community on long-term loan. This includes: Pierrot and Skeleton in Yellow Robe (1893) and Children at their Morning Toilet (1886), which were taken up in the collection in 2007 and 2008 respectively. The acquisition of these two paintings belonged to the purchase directive for the Flemish government, which is devoted to the maintaining or return of key works within the history of Flemish and Belgium art in Flanders. In addition, the MSK Ghent possesses twelve drawings by James Ensor, amongst which are the large The Entry of Christ into Jerusalem (1895) from the series The Aureoles of Christ or the Sensibilities of Light, one of the most important drawings from the artist and an inexhaustible source for the understanding of the social and artistic climate at the end of the 19th Century. In 2004, the Flemish Community purchased the companion piece to this work by the name of Christ Shown to the People (1887) and gave it to the museum on loan. At the time of purchase the work was already in the museum: the owner at the time had in fact already given the drawing on loan. Ensor exhibited the two works as companion pieces. This is witnessed by the small drawing in which the artist brought both compositions together in a unity and that since 1984 also makes up a part of the Ghent museum collection. The other drawings of the museum were purchased primarily during the early years of 2000.

Thanks to an 'Ensor action‘, organised by an association of the Friends of the Museum on the occasion of its hundred-year existence, in 1998 the MSK Ghent was able to acquire a unique ensemble of etchings by Ensor. The collection was assembled in the 1930‘s by August Taevernier, author of an oeuvre catalog of Ensor‘s etchings, and who was the chair of the Friends of the Museum from 1951 until 1976. His collection was of remarkable quality and the mere fact that all of the prints that Ensor ever etched are provided therein, is exceptional. Due to his contacts with the Brussels‘ art dealer Paul Van de Perre, August Taevernier could systematically collect special prints. The collection, which was acquired from a private collection, contains 185 prints in total: a number of prints appear two or three times in various stages and versions.