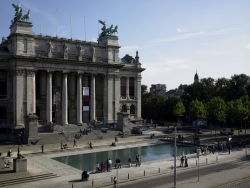 © Kristien Daem
In 1905, the Antwerp exhibitions association, L’Art contemporain, organised a large retrospective with the works of James Ensor. From that date onwards, the artist would find the most interested collectors of his art in Antwerp. The fact that the Royal Museum of Fine Arts Antwerp (KMSKA) curates the largest Ensor collection is to thank from the generosity of the members of L’Art contemporain. A group of members, among which were: G. Born, A. Aerts, H. Fester and the 3 brothers Franck, financed the purchase of a number of paintings in 1921, among which were four early, realistic pieces (Grey Seascape (1880), the portrait of Théo Hannon (1882), Woman with Blue Shawl (1881) and Afternoon in Ostend (1881)). The gift also includes Skeletons Fighting for the Body of a Hanged Man (1891) and The Intrigue (1890), Ensor‘s most reproduced mask compositions. With the Theatre of Masks (1889), Flowers and Vegetables (1896) and Still life with Oysters (1882), which Pol De Mont had already purchased in 1904 for the museum, the museum was already in charge of the largest and most representative Ensor collection from that moment on. In memory of her generous spouse, the widowed Mrs. Aerts gifted three more works in 1924: Mask and Crustaceans (1891), a painted variant from 1900 of the etching The Main Dock, Ostend (1888) and a later Still life with Chinoiseries (1906-1907). In 1926 the museum again purchased an important mask tableau at an auction in Brussels entitled, Astonishment of the Mask Wouse (1889).

In the meantime, Ensor‘s good friends Dr. Albin Lambotte and his artistically acute spouse Emma had built up a collection in their house in Antwerp that was comparable to the one in the museum. Compelled by dire financial needs, they proposed to the 'Commision for purchases of the Royal Museum in Antwerp‘ a price of 1.000.000 Belgian francs to become the owner of a collection of drawings, still lifes, seascapes and major works. The Antwerp museum purchased six works: Girl with Upturned Nose, an early work from 1879, a study entitled The Wait (1879 or 1882), Still lifes with Chinoiseries (1880), the well-known The Oyster-eater (1882) (the painting was rejected for purchase in 1908 by the city council of Liège and the current-day National Museum in Brussels), a crucial landscape Adam and Eve Expelled from Paradise (1887) and the Sloops (1890). The remaining works from the Lambotte collection provisionally remained in private possession in Antwerp. Later, these works ended up in various institutions both at home and abroad: Pierrot and the Skeletons (1905, oil on canvas, KBC Bank, Belgium), Self-portrait with Masks (1889, oil on canvas, Komak (Aichi), Menard Art Museum), The Garden of Love (1888, oil on canvas, Toyota City (Aichi), Toyota Municipal Museum of Art) and Children At Their Morning Toilet (1886, Ghent, Museum of Fine Arts, in long-term loan from the Flemish Community).

In 1930, the collection was supplemented for a third time with an important ensemble. François Franck gifted the naturalistic Rower (1883), The White Cloud (1884) and the top piece, The Fall of the Rebel Angels (1889). His brother Charles gifted one of Ensor‘s most conventional still lifes, The Skate (1880).

During the period of WWII, the collection was supplemented yet again with the gift of the still life Azaleas (ca. 1925), in which Ensor cited as a painting within a painting The Virgin of Consolation of 1892 (oil on wood, private collection), as well as the purchase of a realistic study from a The Lady with Red Parasol (1880) and the playful Music in the Vlaanderenstraat/Rue de Flandre (1891).

Conservators with a passion for Ensor

Walter Vanbeselaere, chief conservator of the museum from 1949 to 1973, consecrated the artistic worth and preferences of L’Art contemporain. The purchases, exhibitions, politics and the publications of Vanbeselaere himself were probably decisive for the prominent place that James Ensor has since held in the 'canon‘ of Flemish and Belgian art. Moreover, with the purchase of works by Van Gogh, Degas and Redon, Vanbeselaere tried to place the Antwerp Ensor collection within an international context.

After WWII, the Ensor painting collection grew to 38 specimens with the Bathing-hut (date unknown), which the sixteen year-old painter painted in situ, the monumental Roofs at Ostend (1884), the large Bourgeois Salon (1881) and The Lady with Fan, or Ensor‘s younger sister Mitche (1880), a puzzling View of Phnosie, luminous Waves and Vibrations or The Roofs at Ostend (on the Van Iseghemlaan) (1890) and a difficult-to-date, distinguished Ensor at his Easel. Before Vanbeselaere departed from the museum, he purchased the famous The Skeleton Painter (1896-1897). Probably Vanbeselaere‘s option to also establish an attractive collection of drawings in addition was at least as important. Shortly after Ensor‘s death in 1949, his inheritors sold large portions of the estate. The Entry of Christ into Brussels (1888- 1889, oil on canvas, Los Angeles, J. Paul Getty Museum) came about via various detours and failed purchase attempts by, among others the Royal Museum of Fine Arts of Belgium, in Antwerp, and this as a long-term loan by Louis Franck. The work would remain in the Antwerp museum until 1984.

In 1951, the museum purchased 500 drawings via a middleman: copies, drafts, sketches and scribbles. One year later the museum came into possession of numerous manuscripts: school papers, texts for speeches, etc. In 1953, the museum also purchased an important number of autonomous drawings.

Chief conservator Lydia Schoonbaert was able to procure Ensor‘s 'Japan-esque‘ Man of Sorrows in 1990. The painting, which was made in 1891, is inspired by an eponymous painting by Aelbert Bouts, which is also kept in the KMSKA. Also during the chief conservator‘s tenure of Eric Vandamme, from 1995 to 1997, the Ensor collection was supplemented by two realistic studies, a drawing and documents. Recently, the museum purchased a sketchbook with studies for Ensor‘s last ambitious painting The Penance Procession in Veurne (1935, oil on canvas, Vatican Monumenti, Musei e Gallerie Pontificie).